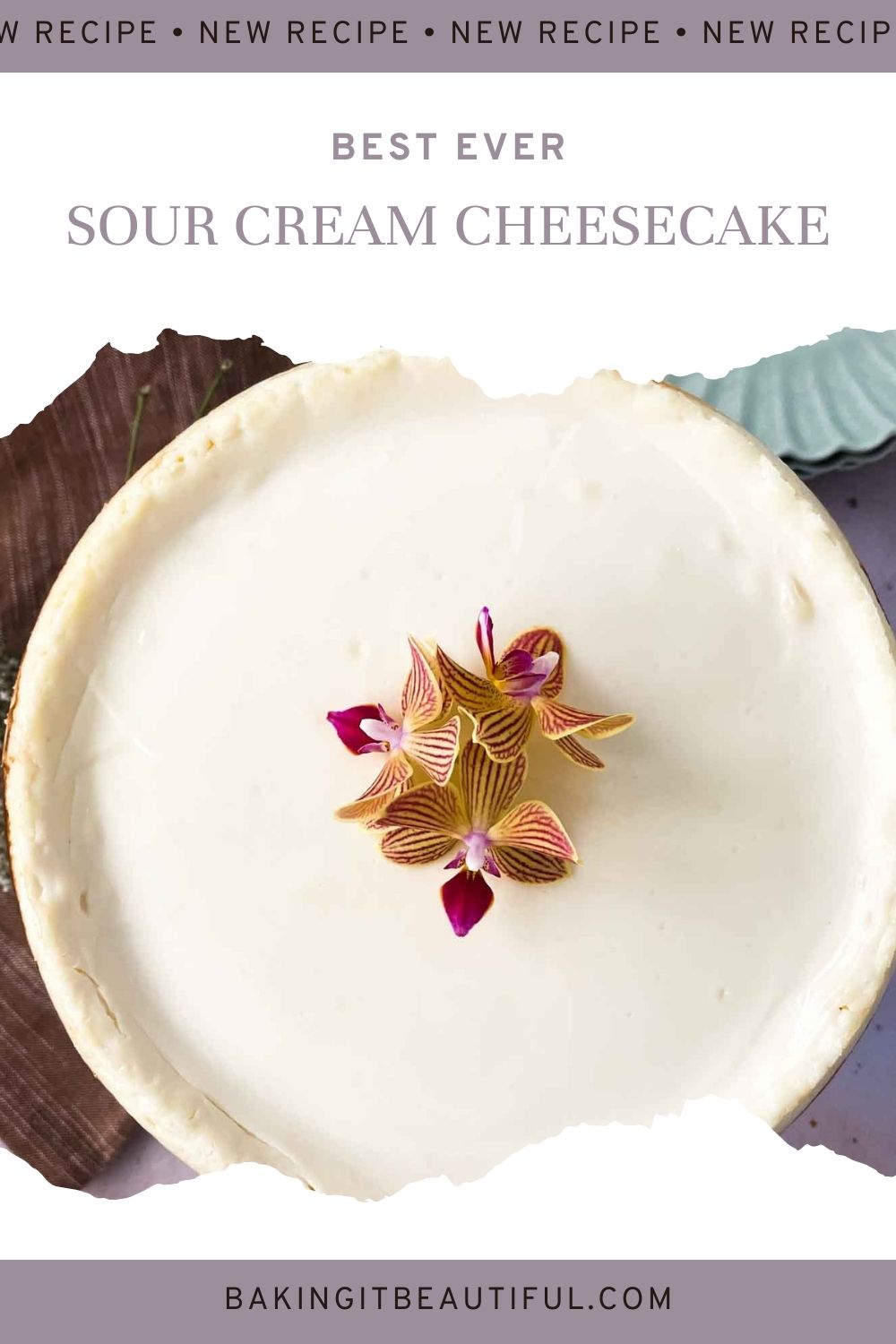 A delicious sour cream cheesecake that will impress all of your guests. This two layer cheesecake may seem daunting, but is easier than you think.

The Story Behind the Sour Cream Cheesecake

A few Christmases ago, my mom gave me a notebook full of recipes of my grandmother’s. I have loved this gift so much, and have probably used it more than any other sibling who received the same gift. Not only does it include my grandmother’s very unique handwriting, but it also includes a write-up on every single person she received the recipe from.

There’re not a ton of recipes, but nonetheless, it’s fun to read through and pick recipes out of every once in a while. My mom probably gets annoyed at me sometimes because I will call asking for interpretation. I mean, do you know what Oleo is? If you do, then you were probably alive in the 1950’s. The sizes of pans were also super weird back them. Have you ever heard of an 8×10 round pan? Like, what is that?

Anyways, my mom told me about a year ago she was making this double layered cheesecake. She said it was delicious, but I didn’t remember much else about it. I decided this would make such a perfect dessert for Easter, and I needed to make it ASAP.

I’ve never been super successful at making cheesecakes. Actually, I’ve only made two in my life and I remember them not being good. One was too eggy and the other was overbaked. I personally love cheesecake, but never make it. Maybe because I’ve been spoiled by The Cheesecake Factory. Nothing can touch it. Their cheesecake is just too good.

However, if you LOVE cheesecake and love a unique take on it, then you are going to love this two layer cheesecake. The top layer of sour cream just takes it up another notch. Your tastebuds will be thanking me later.

This may seem like a time consuming recipe, but it is well worth it!

Do you suggest a certain brand of cream cheese?

My mom swears by only using Philadelphia brand cream cheese for cheesecakes. The texture is much smoother and mixes better. However, I have used the store brand with much success.

Is mixing it on high for 3-5 minutes really necessary?

Yes! This will whip air into your cream cheese mixture and create more volume and a lighter texture.

My cheesecake sunk while applying the top layer.

First off, still cook it and eat it even if it doesn’t look beautiful. Next time be incredibly gentle while moving the pan and applying the sour cream layer.

Should the cheesecake be jiggly when it’s done?

It will be slightly jiggly in the center when you pull it out. However, it will firm up as it cools at room temperature.

Is it necessary to chill it for so long?

I found that the flavor and texture was better the next day. If you are really eager to eat it though, I say go for it.

Additional Recipes You May Enjoy 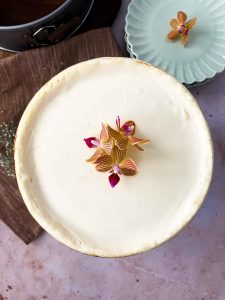 A delicious sour cream cheesecake that will impress all of your guests. This two layer cheesecake may seem daunting, but is easier than you think.
No ratings yet
Print Recipe Pin Recipe
Course Dessert

For the Cheesecake Layer

For the Sour Cream Layer