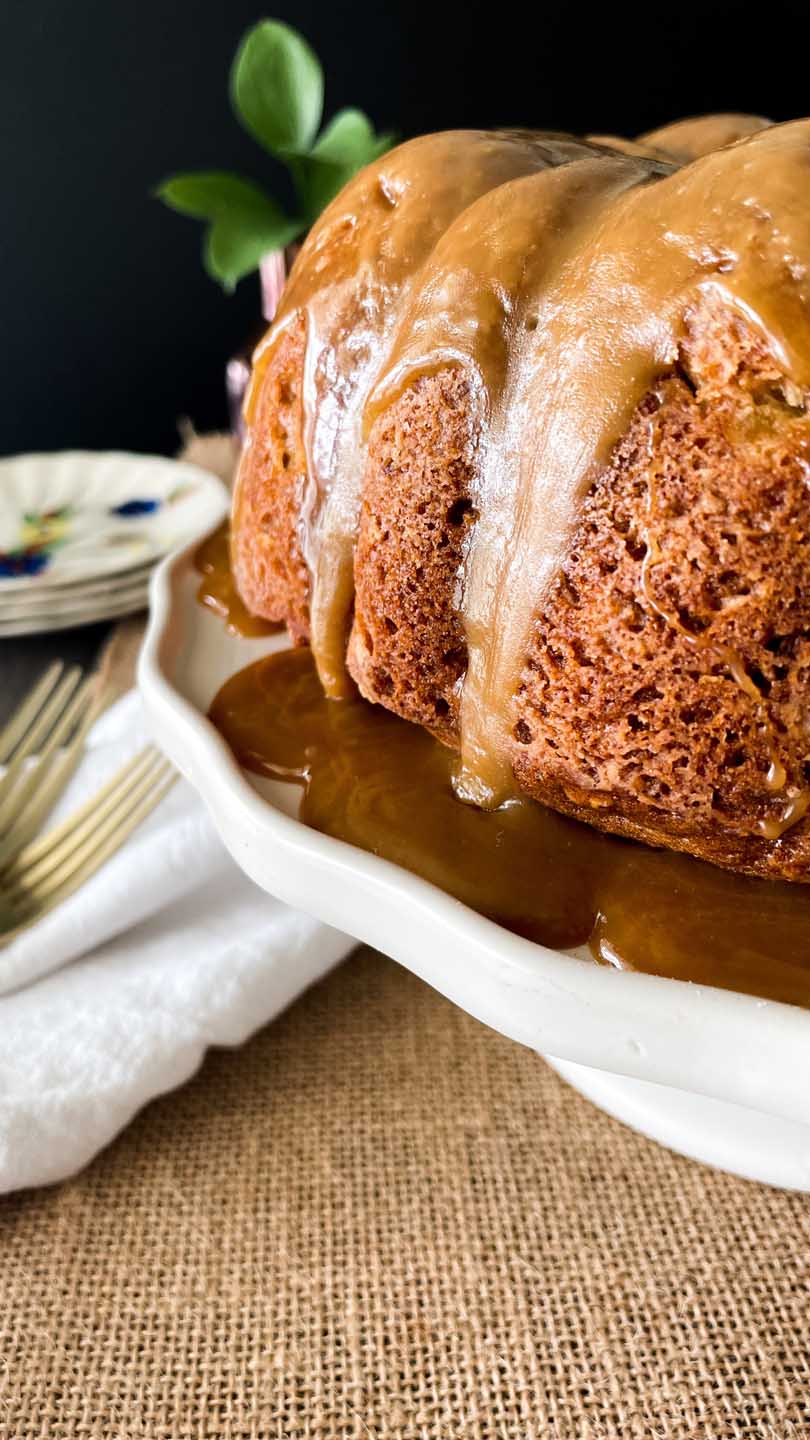 This cinnamon cake is filled with chunks of tart apples and crunchy nuts. Then, to top it off you drench it in the most amazing caramel sauce.

Story Behind the Recipe

The kids are in school and fall is in the air, at least in the early mornings. In fact, my husband and I spent a weekend in Provo, Utah recently, and as we walked out of the hotel each morning the cool mountain air greeted us. I was immediately transported back to my freshman year at BYU and walking to those early 8am classes that no one warned me not to take!

I love a good autumn breeze in the morning and at night. It always makes me think of football games, picking apples, and baking yummy treats.

With thoughts and feelings of fall stuck in my head, I knew I needed to create something that would bring in those fall flavors. It may be a little too early for pumpkin baking, but what about apples? I whipped open my book with all of my grandmother’s recipes and browsed it remembering seeing a few apple recipes.

I landed on her “fresh apple cake” recipe. This recipe was given to her from her friend Frances Hoskins. My grandmother worked at the local community college and Frances worked as a secretary there. The crazy thing is this was way back in the 1970s-1980s.

I love using these recipes of my grandmother’s and that they are in her handwriting, but I have to admit there is some translating that comes along with using these recipes. Such as, what is Oleo? What is considered a 3qt pan? Is there something special about Crisco oil versus other oils? And why did they use so much margarine back in the day?

This recipe called for a TON of oil, so I decreased that and added applesauce instead. I thought it made sense, since this is an apple cake after all. There also wasn’t any cinnamon in the recipe. Apples and cinnamon just go together like peanut butter and jelly, so that was a no brainer. I also added a tablespoon of lemon juice on top of the diced apples. Lemon juice really makes apples taste, so that was a must.

If you are looking for a cake to ring in those cooler summer nights, this is the perfect cake. Hopefully, the leaves will be changing colors soon. Don’t forget the brown sugar sauce – it just takes the whole entire cake over the top! 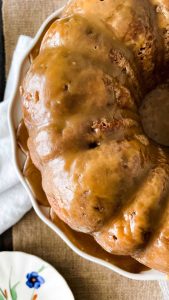 This cinnamon cake is filled with chunks of tart apples and crunchy nuts. Then, to top it off you drench it in the most amazing caramel sauce.
5 from 1 vote
Print Recipe Pin Recipe
Prep Time 25 mins
Cook Time 1 hr 15 mins
Servings 15 slices