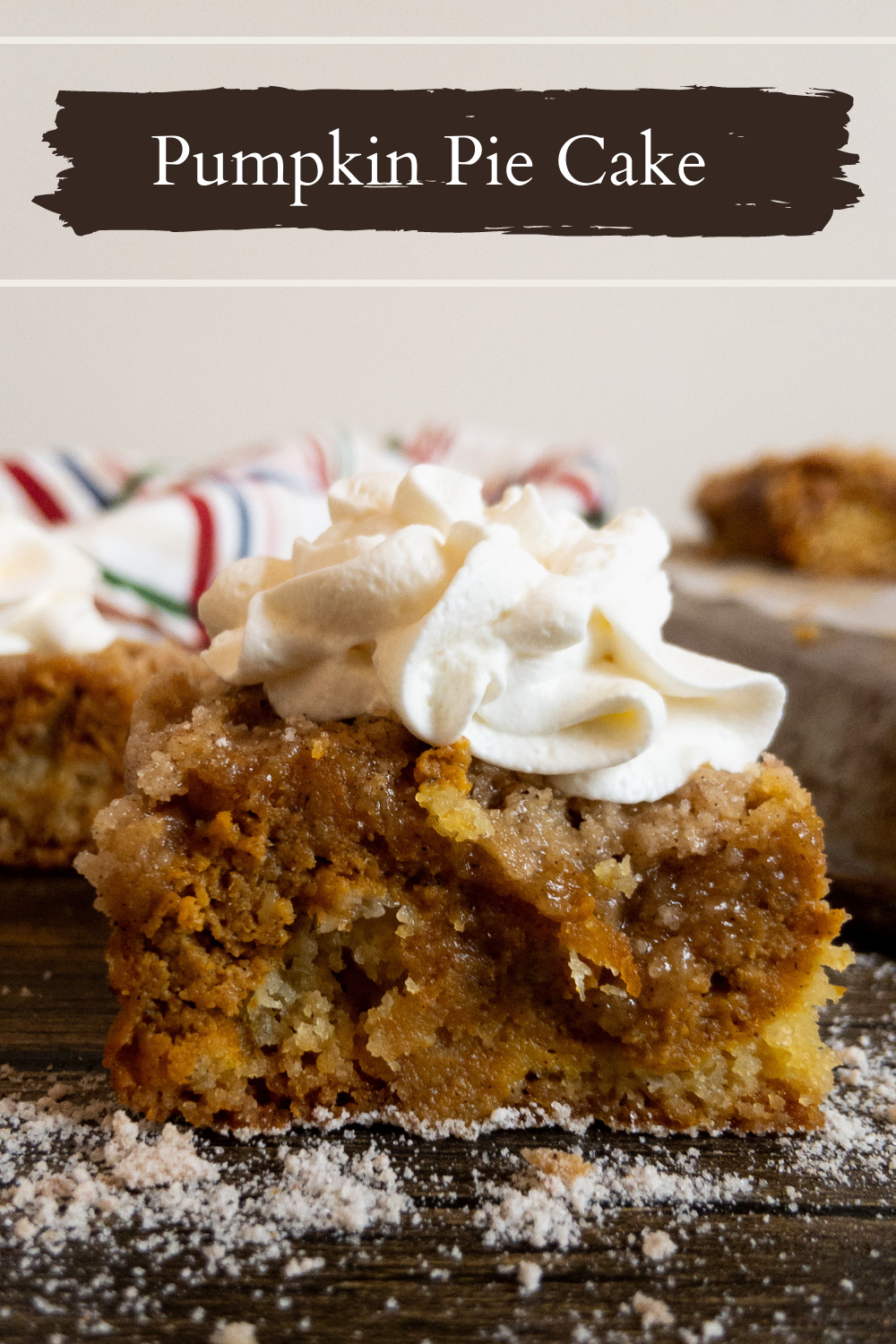 Whether you love or hate pie, you will be a fan of this Pumpkin Pie Cake. The filling is reminiscent of pumpkin pie, but the cake crust will have you swooning over these in no time.

The Story Behind Pumpkin Pie Cake

Years ago, when my husband and I were dating and attending BYU, we came across this recipe for Pumpkin Pie Cake. Tim worked in a tiny, dark room in the library. He would take pictures of old newspapers for microfiche film. He literally sat, flipped a page, pushed a button, flipped, pushed a button, on repeat for 4 hours every day!

I don’t know how he did that for so long, but he did come across some interesting reads along the way. One of the reasons he kept going to this monontonious job was because he loved his boss Marcel.

One day, the secretary brought in an amazing pumpkin dessert for Marcel’s birthday. Tim raved about it for weeks, saying it was the best dessert he had every had. I told him he had to get the recipe, so I could make it for him. He finally got up enough nerve to do so, and I made it for him as a surprise for his birthday a few days later.

I was so excited to surprise him with it, but I had frosted the top with whipped cream because that’s what I thought I was supposed to do. He didn’t like it like that because he insists it needs to be eaten warm, and you can’t warm it up with cream on top. I, however, love to eat it cold. Right out of the fridge, please. So I have learned to serve the whipped cream on the side, so we can each have it the way we like it. Plus, the top stays nice and crisp without the cream on it. Either way, though, it is incredible, and beats pumpkin pie out of the ballpark any day.

Is there a difference between pumpkin pie filling and pumpkin puree?

Yes! There is a huge difference. Pumpkin puree is straight pumpkin with no additives. Pumpkin pie filling has water, sugar, and spices added to it. They are not interchangeable, so make sure to use pumpkin puree for this recipe.

Can I use a different flavor cake mix?

To be honest, I have never made it with a different cake mix besides a yellow one. However, I think it would still taste delightful with a white cake mix or even a spice cake mix.

How should I store this?

This needs to be stored in the fridge. If it stays on the countertop it gets super soggy and mushy. I prefer to eat it cold and others in my family love it warm.

The bottom layer doesn’t quite fill the entire bottom of my pan.

It does take some time to stretch it onto the bottom of your pan. If there is a little gap or hole, it will work itself out during the baking process. Just try your best to get the entire pan filled with that cake layer though. You don’t want the pumpkin filling running underneath the cake layer.

If you love pumpkin, then you will absolutely love these other pumpkin recipes. 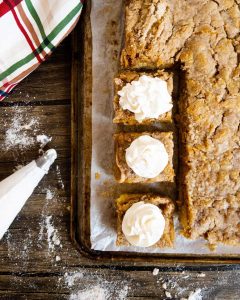 Whether you love or hate pie, you will be a fan of this Pumpkin Pie Cake. The filling is reminiscent of pumpkin pie, but the cake crust will have you swooning over these in no time.
5 from 2 votes
Print Recipe Pin Recipe
Prep Time 25 mins
Cook Time 45 mins
Course Dessert

For the Bottom Layer

For the Pumpkin Layer

For the Cinnamon Streusel

This cake is made in three different layers. Don’t let that overwhelm you. It goes very quickly as the base for the bottom and top layer are mainly cake mix. You can do it!