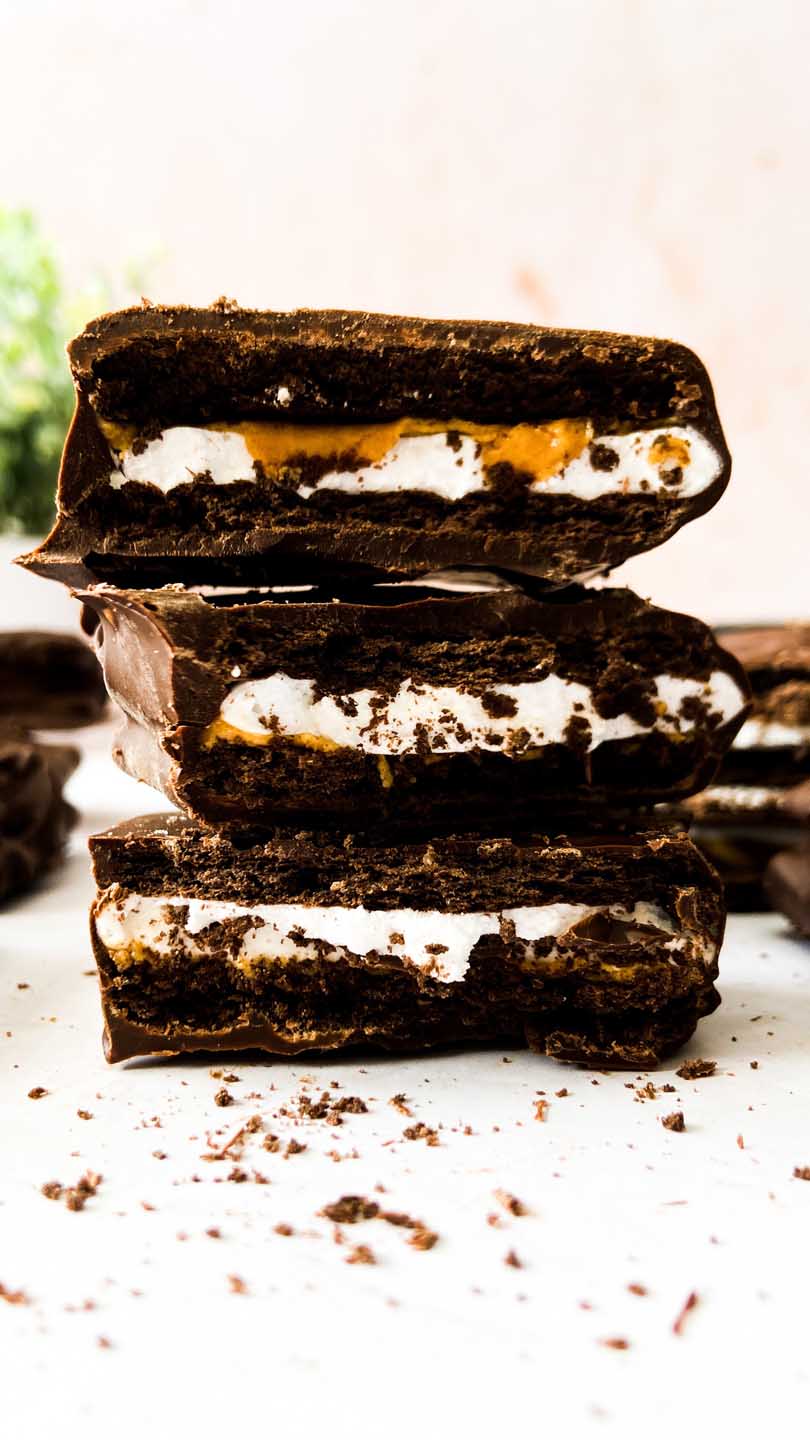 A fun take on a traditional s'mores. Homemade marshmallows and peanut butter stuffed between chocolate graham cracker and smother in chocolate.

I’m a sucker for anything with marshmallows and these peanut butter s’mores bars are no exception. Back when we (by we, I mean my husband and I) were in business school out at Stanford, we would get together often for fire pits with our good friends.

Stanford is a magical place where everyone’s back doors open to a gated, communal courtyard, and playground. So after all of the little ones were in bed, everyone would bring their camp chairs and baby monitors and gather around a fire pit. My neighbors always had the makings for s’mores on hand, so you know I was always game for a fire pit night.

One of the things I discovered when we were outside doing fire pits was that you can totally replace the traditional Hershey’s bar with Reese’s Peanut Butter cups. Say what? How was I 28-years-old and when discovering that?

About a year ago, I was over at my bestie’s house and noticed she had a bag of the s’mores mix you can buy at Costco. She pulled it out for me to try and then wound up sending it home with me. Bad mistake! I finished the bag off the next day. I’ve only allowed myself to buy that mix one more time, and let’s say it didn’t end very well either. Or it did. My motto is, “I might as well eat it all so it’s not in the house anymore.” Anyone else think that way?

Since we don’t have a fire pit, and don’t make s’mores often, I decided I wanted to come up with a treat that mimicked an ooey gooey marshmallowy s’more. The thing I love about the s’mores mix you can buy at Costco is that each piece is covered in chocolate. That was a must for me. Yummy ingredients covered in chocolate. How can you go wrong with that? Although, I do know that everyone has different levels of chocolate love, so dipping the entire bar in chocolate may not be for you. You could do half, you could dip just the corners, or you can really go for it and dunk the whole thing.

Just like a fire pit roasted s’more, these peanut butter s’mores are a bit messy! How can it not be when there is gooey marshmallow involved? The marshmallow isn’t really the messy part here, though. These aren’t M&M’s, so they are going to melt in your hands as well as your mouth since they are covered in chocolate.

A fun take on a traditional s’mores. Homemade marshmallows and peanut butter stuffed between chocolate graham cracker and smother in chocolate.
No ratings yet
Print Recipe Pin Recipe
Course Dessert