A fun breakfast to use up any leftover banana bread. Banana bread french toast is sure to delight all of your breakfast eaters.

Story behind the Recipe

Even though 2020 was a bust of a year, there were some really great things that came out of it for our family. We grew closer together, in proximity and in relationships, we’ve learned a lot of patience, or maybe our patience was tested to its brim every single day. I also learned a new love of food photography that I’m continuing to learn and grow in. We’ve enjoyed the slow pace instead of running to activity after activity. I also grew in appreciation for teachers, and I’m so incredibly grateful my kids get to attend in person school now.

Last year was also a great year for some wonderful memes and a lot of time browsing the internet. I saw a few places where people were saying they had just learned that you could make French Toast with banana bread. Say, what?! I didn’t know that little gem of information either.

When I saw that, I made a mental note to make french toast the next time I made banana bread. Well, when I whipped up my grandmother’s Banana Bread recipe, I knew it was the perfect texture for french toast. Since that recipe makes a thick, dense bread, I knew that soaking up an egg mixture would go over really well.

Oh.my.heavens. Guys, this is delicious! It’s definitely a breakfast that should be saved for a hearty weekend breakfast. It’s rich and heavy, and so delightful served with fresh bananas, nuts, and real maple syrup.

You can use your favorite banana bread recipe or whip up a new one. I think this recipe would be great with chocolate chip banana bread, plain, or even a nut filled banana bread. 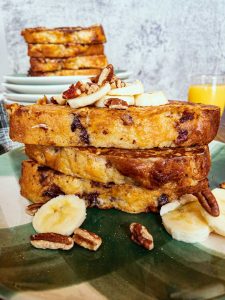