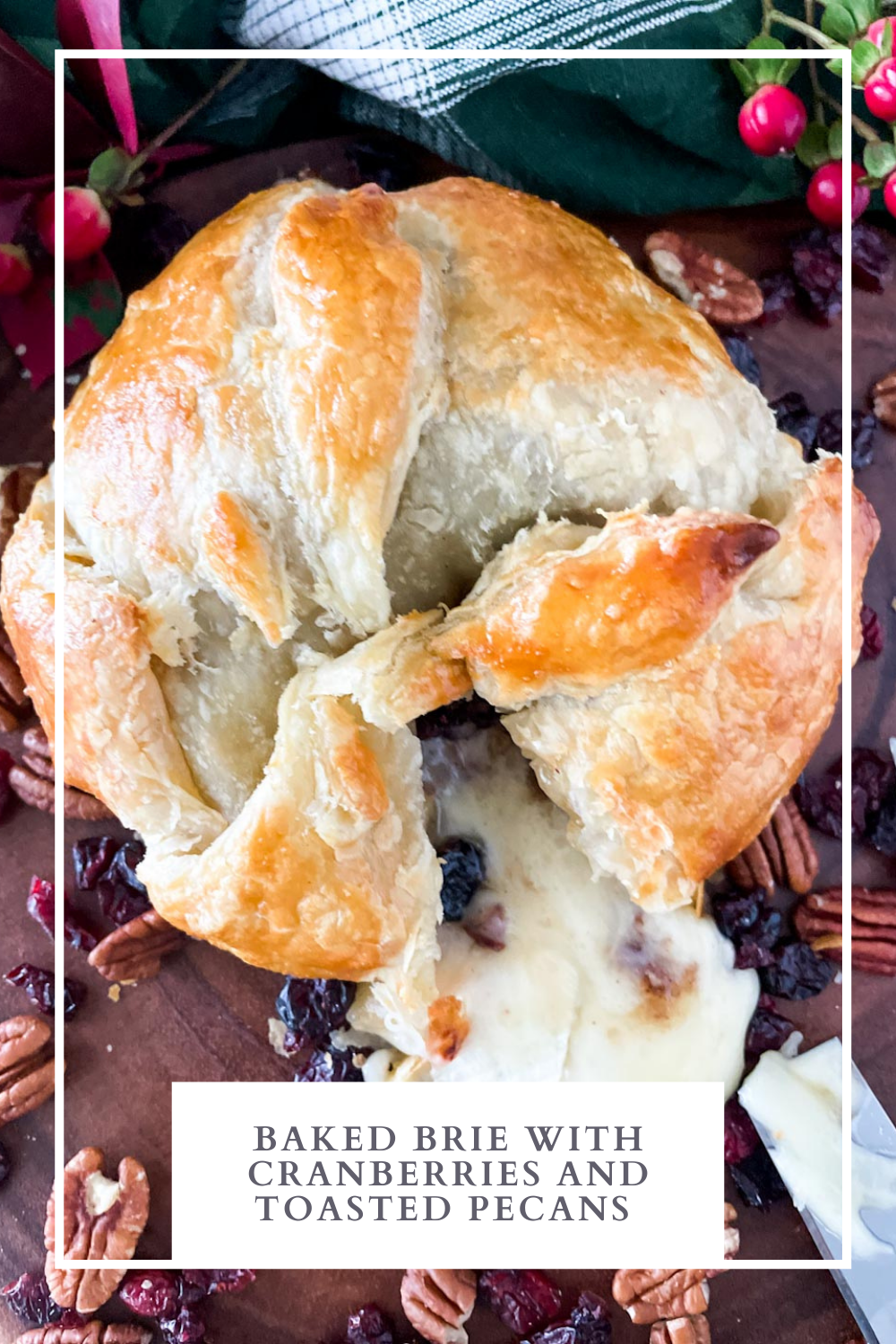 The best charcuterie boards have an assortment of cheeses. This baked brie with cranberries and toasted pecans will not only wow all of your guests with its impressive look on your board, but they will be dying over the taste.

The Story Behind the Baked Brie Recipe

Baked Brie. You’re going to love this. You may be beginning to think, “wow, does she really have a story behind each recipe?” Maybe not, but most recipes I share I have very fond memories of. That’s what I love about food. Food brings people together and during those moments wonderful memories are made.

This baked brie with cranberries and toasted pecans was first introduced to me about two years ago. We were attending the baptism of a child of some of our dear friends from business school at Stanford. All of the Stanford business school friends living in Utah were invited.

The great thing about baptisms is the food that comes afterwards. We were all asked to bring a dish to share. I, of course, was asked to bring a dessert. I made sugar cookies in the shape of the #8, since that is how old the girl was that was getting baptized. I decorated them in all white and added pearl sprinkles. They were stunning.

That’s not what I remember about the day, though. I remember one of our friends came in and starting baking something in the oven and I remember her saying it was taking longer than normal. I didn’t press her on it because I was too caught up with the cheese and prosciutto board. Honestly, I’m pretty sure that was the first time I had ever eaten prosciutto and boy did I eat a lot of it.

When my friend finely pulled her dish out of the oven, I was impressed! It was a beautifully golden puffed pastry. I had no idea what was on the inside, but I couldn’t wait to dig in. As soon as we cut it, we discovered that the brie didn’t melt like it was supposed to even though it had been in there for a long time. We later discovered it was because she used a Costco sized brie instead of a smaller wheel. That didn’t stop me from eating it. Even though I was already stuffed from all of the other delicious food I had eaten, I could not stop coming back to this baked brie.

The brown sugar gives it the perfect sweetness, then you have the crunch from the toasted pecans, and then chewiness from the dried cranberries. And then it’s all wrapped up in a buttery pastry. It’s divine.

My daughter loves when I make this baked brie. She says she wants to be a cheese connoisseur when she grows up because she loves cheese so much. However, when I put this on my list of things to make, she politely requested that I not add the nuts and cranberries to the baked brie. She’s crazy!! All of these few ingredients work together so well and each one of them is needed to make this a delicious addition to your charcuterie board.

F.A.Q.s and Troubleshooting for Baked Brie with Cranberries and Toasted Pecans

Where do I find puff pastry?

Sometimes this can be a difficult ingredient to find. You can easily find it around the holidays, but throughout the rest of the year it might be tricky. It is typically in the freezer section of the grocery store beside the frozen pies.

Do I have to use brie?

Yes! Brie gets so gooey and melty. It’s a mild tasting cheese and so creamy. You will love it.

My puff pastry is doughy in some places.

I have run into this problem a couple of times. The part of the pastry that doesn’t get cooked all the way is the part that is folded over. So to prevent it being under baked trim the puff pastry before folding, or even during the folds to make it a little lighter in areas. Another trick you can do is cover the entire thing in foil towards the end of baking and add an extra 10 minutes.

How should I reheat this?

If there are leftovers, I would place it in foil and warm it up in an air fryer or the oven for a few minutes until the cheese gets melty again. If you want a quick fix, a minute or two in the microwave will also work, but it will probably make your pastry a little soggy.

I opened the oven and all the cheese is spilling out.

This will happen if you haven’t sealed the puff pastry well enough. Make sure there are no holes or gaps when wrapping the puff pastry around the brie. You can seal tricky spots to each other with a little touch of water.

If you are a fan of delicious appetizers, make sure to check out these other recipes of mine. 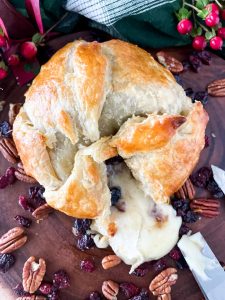 The best charcuterie boards have an assortment of cheeses. This baked brie with cranberries and toasted pecans will not only wow all of your guests with its impressive look on your board, but they will be dying over the taste.
5 from 2 votes
Print Recipe Pin Recipe
Prep Time 10 mins
Cook Time 35 mins
Course Appetizer
Servings 8